The history of South India covers a span of over four thousand years during which the region saw the rise and fall of a number of dynasties and empires.
The period of known history of the region begins with the Iron age (1200 BCE to 24 BCE) period until the 14th century CE. Dynasties of Satavahana, Chola, Chera, Pandyan, Chalukya, Pallava, Rashtrakuta, Kakatiya, Seuna (Yadava) dynasty and Hoysala were at their peak during various periods of history. These Dynasties constantly fought amongst each other and against external forces when Muslim armies invaded south India. Vijayanagara empire rose in response to the Muslim intervention and covered the most of south India and acted as a bulwark against Mughal expansion into the south.
When the European powers arrived during the 16th and 18th century CE, the southern kingdoms, most notably Tipu Sultan’s Kingdom of Mysore, resisted the new threats, and many parts eventually succumbed to British occupation. The British created the Madras Presidency which covered most of south India directly administered by the British Raj, and divided the rest into a number of dependent princely states. After Indian independence South India was linguistically divided into the states of Tamil Nadu, Andhra Pradesh, Karnataka and Kerala.

Comparative excavations carried out in Adichanallur in Thirunelveli district and in Northern India have provided evidence of a southward migration of the Megalithic culture.  The Krishna Tungabhadra Valley was also a place for Megalithic culture in South India.

Geologists and anthropologists believe that one of the oldest areas of human settlement is South India. This is supported by evidence of geological antiquity, that favourable climate of the Deccan, and the stone relics discovered in the elevated areas in the valleys of the Narmada and Godavari. It may be assumed that the higher regions of the Deccan, which comprise hills and valleys, supplied ancient man with edible fruits and other products.

Scientists think that human settlement in this region is almost 500000 years old. This period may be divided into a number of stone-ages.

In 1863, Robert Bruce discovered stone-age implements near Pallavaram and after that similar finds have been made in many parts of South India, as also in Karnool and the valleys of the Godavari.

It is believed that a wooden comb discovered in Gundakkal belongs to early stone age. Implements belonging to the period between Paleolithic and Neolithic ages have been discovered in Sayorpuram in Thirunelveli, and the valleys of the Krishna and the Godavari. A variety of clay pots and vessels have been unearthed in Padapad in Karnool, and Sanagundala Durg.

The people of the middle stone-age were mostly hunters. The practice of burying corpses prevailed among them. Thirunelveli, Thirussirappa!!i, Salem and North Arcot of the old Madras state, Warangal, Ananthapur and Hyderabad of Andrapra Pradesh have yielded remains of the Neolithic Age. So also in Mysore.

There is reason to believe that the people of these areas lived together as families engaged in agriculture. They domesticated animals and made fire by rubbing together wood and stone. They could also make boats and knew the technique of using the potter’s wheel. Cloth was made by weaving cotton and wool. Their proficiency is also to be seen in making combs and ornaments from bone, shells and rudraksam.

It is said that the lirigam and bull carved into a hill side in Kapgallu in Bellari belong to the New Stone Age. But its authenticity has not been conclusively established. Another fact worth noting is that specimens discovered in Raipur in Andhra and Brahmagiri in Mysore indicate that after the Neolithic Age, but before iron began to be made use of, there prevailed a time during which brass and copper were used.

The remains of a period during which iron was used have been discovered in Thirunelveli, Ananthapur, Kadappa, Karnul and Karnataka.

The most extensive area ever discovered from the pre-historic period is supposed to be Adichanellore in Thirunelveli. Complete skeletons of humans, improved earthen utensi Is, gold ornaments and similar other relics have been discovered from this place. 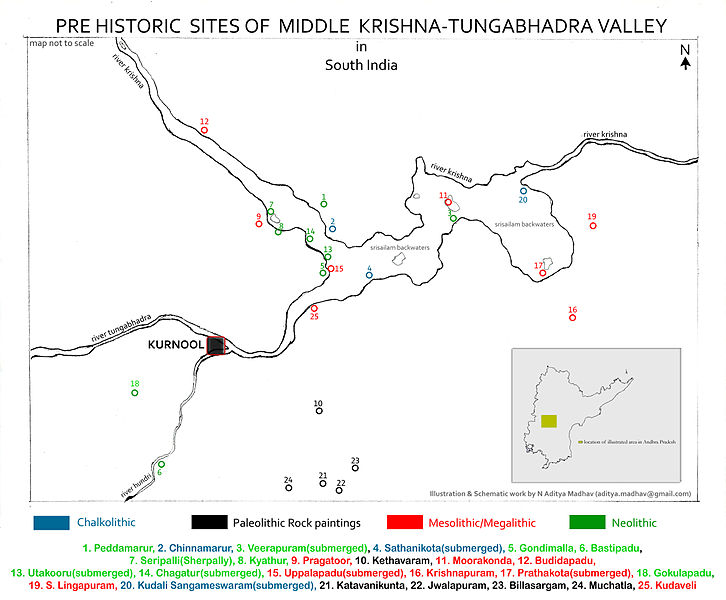 The earliest Iron Age sites in South India are Hallur, Karnataka and Adichanallur, Tamil Nadu at around 1200 BCE.
Early epigraphic evidence begins to appear from about the 5th century BCE, in the form of Kannada-Brahmi and Tamil-Brahmi inscriptions, reflecting the southward spread of Buddhism.

Iron Age is characterized by megalithic burials.
During the 1,000 B.C., the present states of Tamil Nadu and Kerala (in southern India) were inhabited by megalithic people.
The important phase of the ancient history of south India is from the Megalithic period to about A.D. 300.

Types of Megalithic Burial
The following are the major types of Megalithic burial:
o Pit Circle Graves: In this type of burial, the body was first excoriated and then buried. Pots and iron artefacts were placed in a grave. A stone circle is erected around the pit.

Cists: These graves have a variety of forms. Cists which is stone coffin were made out of granite slabs with one or more capstones, with or without portholes. Cistsare fully buried, half buried, or even on the bare rocks. They may contain single or multiple burials. A single or multiple stone circles erected around the cists.

Laterite chambers: In Malabar region, the grave-chambers excavated into laterite instead of granite slabs.

Alignments: It is a different kind of burial in which a large number of standing stones called ‘Menhirs’ were arranged in squares or diagonals shape. They have been found in Gulbarga district and south of Hyderabad. However, in Kashmir, Menhirs have been found arranged in a semi-circle.
Sacrophagi: These legged urns of terracotta sometimes have animal heads and are not very common.
Urns: The practice of burying excoriated bones in urns seems to be taken from the Neolithic past. They are marked by capstones or stone circles, found mainly on the eastern coast. 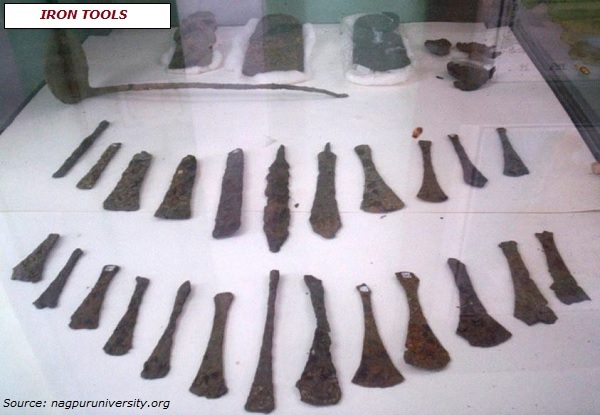  Undoubtedly, there was a wide range of variety in Megalithic construction, but the typical identity was a Black-and-Red ware and distinctive iron tools. They have uniformity all over the peninsula.
 The pottery shapes include conical or looped lids, carinated vases, pedestalled bowls, spouted dishes, etc.
 The iron tool includes axes with crossed straps, sickles, tripods, tridents, spearheads, swords, lamp hangers, arrowheads, and lamps.
 Iron Age, in the history of India, is a period when the use of iron for tools and weapons became common, but during this time, the dated literature also began to be written. Therefore, the period of Megalithics marked a point in time where prehistory ends and history begins.
 The builders of these Megalithics remain unknown to northern people because no reference to these monuments has been traced in Sanskrit or Prakrit literature though the early Tamil literature does contain descriptions of these burial practices.

 The earliest account about the people and kingdoms of the area are preserved in three forms
o Ashokan inscriptions;
o Sangam literature; and
o Megasthenese’s accounts.
 The Rock Edict II and XIII of Ashoka described the southern kingdoms of Chola, Pandya, Satyaputra, Keralaputra, and Tambapanni.
 Ashoka’s kindness to these neighboring states has been very much proved by the fact that he made provisions for medicines and food items etc. for animals and humans of these kingdoms.
 In the Hathigumpha inscription of Kharvela, it has been found that Ashoka was credited for defeating a confederacy of Tamil states.
 A detailed description of south Indian states is found in Sangam literature belonging to the first four centuries of the Christian era.
 The Tamil language is the oldest among the spoken and literary languages of south India. Sangam literature was written in this language.
 The Pandyan kings assembled literary assemblies called as ‘Sangam’.
 Sangam literature consisted the collection of verses, lyrics, and idylls, which were composed by poets and scholars.
 Sangam literature preserves folk memory about the society and life (in south India) between the 3rd Century B.C. and 3rd century A.D.